Somewhere, long ago someone settled in a remote area and decided to call it ‘the angels’. Why? What story is behind that? It fascinates me.

It is a short flight from San Francisco to LA. Just long enough for one movie. Knowing by now what is on offer, I quickly scan what is new but settle for The Rocky Picture Horror Show, having loved it since I first saw it as a teen in a night theater in The Hague. To my left a guy in his late forties struggling with a powerpoint pitch on TicToc ¹. Using 1990’s powerpoint technology to pitch this seems wrong, but what to expect when you let a middle-aged guy run the campaign, he will repeat the tricks he learned in his twenties. I dream up my own pitch: imagining a stage all in black, a short blond girl of about 22 enters from the left, toned down makeup and her hair in a tight straight ponytail, to make her look younger and more innocent than she is. She holds a big microphone with both her hands. Subliminally alerting the audience to the phallus aspect. When she says “Good evening everyone”, she bends her head slightly into the microphone while keeping her eyes fixed on the audience, as if she is about to blow that dick. One by one old crt screens coming on stacked in a huge wall behind her, each one showing a different TicToc video, while the young ladies speeches, using mostly three word sentences larded with words like ‘generation’ and ‘new’. Now that is how you do a pitch.

To my right an Indian who works in San Francisco. He keeps talking to me even though I want to see my movie. Finally I give in and we talk about life, work and relations. For some reason he seems to adore everything I say and while outwardly humble, my ego grows by the minute. He sold his company to Google two years ago, staying on as director to lead the project. He begs me to come over to India for an all expenses paid trip. Even going so far as to send an email to his secretary to buy an open ticket from anywhere in the world to Mumbai.

LA is a feast of recognition. The first thing I see exiting the metro is Hollywood boulevard and the endless rows of stars on the side way. Most names I don't even recognize and some are a surprise to me; I mean Ronald Reagan has a star for his acting prowess? Is it not supposed to be for artists famed for their achievements in art? Sunset boulevard, Santa Monica, Melrose, Rodeo drive, Beverly Hills, the Hollywood sign and Tinseltown itself, last house on Mulholland, Venice beach, the Pier… there is so much to see and most of it is only fun because of the recognizability. But I love it.

Walking down the meandering road from the Hollywood sign a yellow hood-less Ferrari passes me by. In it a guy in his early fifties and a fake blond 20 year old. Twenty minutes later I am at the foot of the hill and see them having dinner in the only restaurant on the street. It is the perfect symbiotic relationship. She dyes her hair blond for him and sucks his dick, he feeds her dinner and takes her on yacht trips.

Everything in LA is about the screen. Not just the massive windowless warehouses whose only distinctive feature the huge plastic letters are, spelling out some name ending in ‘film studios’. Closely guarded by iron fences and a single guard in a booth by the entrance. No, it is everywhere. Eighty percent of all billboards promote some movie or tv show. There are actor schools, makeup schools, music score makers, prop studios, everything the industry needs. Oh, and of course endless bars, to feed the droves of tourists and indirectly also feed the actors and actresses that do not find an acting job. 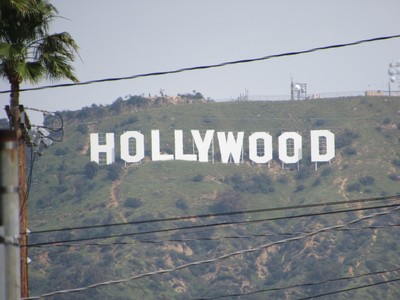 All the cliches about the city of angels are true. In my dorm everyone is ‘in the business’. Of course none of them have actually ever held a paying job in the business, but they all claim to be co-director, editor or writer. Trying to sell me a slice of Domino's pizza to add another dollar to their wallet. Eating popcorn and watching Netflix documentaries on early 2000’s tv shows. Nodding approvingly each time a random face on the screen makes an opinionated statement about some show or the industry.

I share my room with a Tunisian man in his late fifties, early sixties. He is in town for the screening of a pilot that he hopes will lead to a series that he can produce, a series for which he claims to have “great and unique ideas”. The screening is in one of the hundreds of little theaters spread around town. They seat 30 people and above the entrance they have these cool billboards where plastic letters are shoved into, to spell out the name of the feature. Old school grandeur.

The other guest is a man in his twenties. He is a total mess. He is so fat he has trouble getting into his top bunk. He has developed a tic where every breath he takes requires him to click his tongue against his palate. He watches videos on his laptop without headphones, so I have to follow whatever he is watching. Mostly it is instructional videos on martial arts, cartoons and channels where they discuss anime. The worst thing is that he talks to himself. Delivering comments like “Haha, yeah that is how you kick a guy”, when watching the karate kid remake, or “Focus, I can do this”, when climbing in his bed. He tries to get everyone involved in his project. A puppet movie, so they don't need to pay actors. He doesn't have a script yet, but knows it will be 8 minutes long. He will do the puppeteering because he is good at that. He will also write the script this weekend, do the story boarding and co-direct. Some lady he met at a restaurant gave him her business card. Naturally leading to his conclusion she will be interested in sponsoring him. Next week he will sell his movie for a lot of money and pay everyone. Now he only has to call his brother so he can asks their mom to ship the puppets over.

P.S.
I saw zero Hollywood stars (sad face). I did pass a row of trailers next to a studio with security guards outside. There were papers with names written in bold pen on the door that I did not recognize. First names only and between quotes. Like “Elisa”. I am sure that is code for “Emma Stone”.

Previous Next Table of contents

Comments on this blog entry are now closed to non-Travellerspoint members. You can still leave a comment if you are a member of Travellerspoint.

If you aren't a member of Travellerspoint yet, you can join for free.